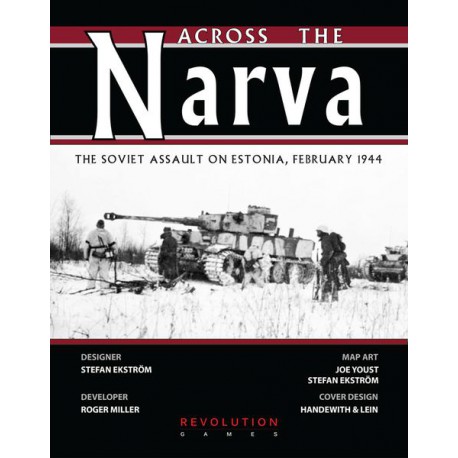 Across The Narva: The Soviet Assault on Estonia, February 1944

Across The Narva: The Soviet Assault on Estonia, February 1944 simulates the continuation of the Leningrad–Novgorod Offensive of January 1944, the Soviet Estonian operation pushed the front westward to the Narva River, aiming to thrust deep into Estonia. Stalin's main strategic goal was a quick recovery of Estonia as a base for air and seaborne attacks against Finland and an invasion of East Prussia. The German answer was a stout defence for the possession of the strategically important Narva Isthmus. Across The Narva is a board game depicting this event in time. The Soviet units established a number of bridgeheads on the opposite bank of the river in February. Subsequent attempts failed to expand their toehold. German counter attacks annihilated the bridgeheads to the north of Narva and reduced the bridgehead south of the town, stabilizing the front until July 1944.

Across The Narva covers the first three months of the Narva Bridgehead campaign and utilizes the same system of command activation chit-pull and base rules as in Konigsberg: The Soviet Attack on East Prussia, 1945 also by Revolution Games (II).

Across The Narva is a reimplementation of Army Group Narwa previously produced by Three Crowns Game Productions.

Note: Players will need to supply one 6-sided die for play.