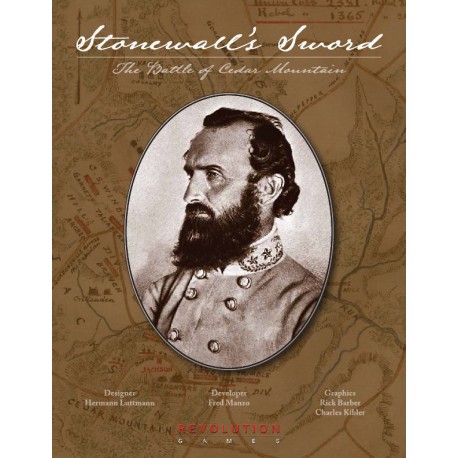 Players win by controlling key areas of the map and by earning victory points by eliminating enemy units. There are two scenarios available, each with their own victory conditions, length, and aspect of the battle that is focused on.

Stonewall's Sword: The Battle of Cedar Mountain also features the Blind Swords chit-pull system which emphasizes the three “FOW’s” of military conflict: fog-of-war, friction-of-war and fortunes-of-war. With each chit pull, players will be challenged to make tough decisions based on their assessment of the current situation. Unlike traditional chit-pull mechanisms, the Blind Swords system ensures that no combat units can be counted on, or conversely, counted out. This yields an environment of tense action and constant surprises – an environment that will challenge each player.

Charles Kibler is the artwork for the counters and Rick Barber is the artist for the map.