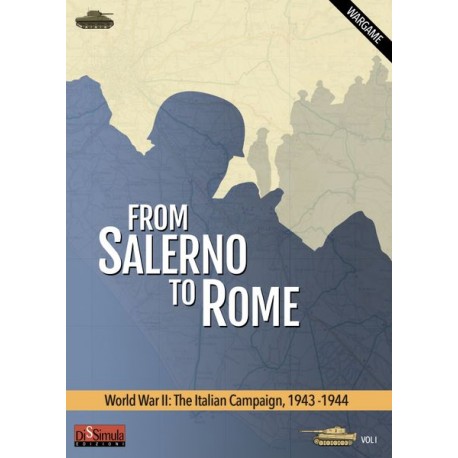 From Salerno to Rome

The game allows you to simulate the first ten months of the military campaign in Italy during WW2, from the landing in Salerno (September ’43) to the liberation of Rome (June ’44).

From Salerno to Rome allows you to simulate the first ten months of the military campaign in Italy during WW2, from the landing in Salerno (September ’43) to the liberation of Rome (June ’44). The game starts with the American 5th army that has just landed in Salerno and the British 8th army advancing in Apulia, while the Axis powers gather their forces to hit with a powerful counter-offensive one of the two allied armies…

The game enables you to fight the battles that took place in Italy from September ’43 to May ’44: Salerno, Cassino, Anzio, Ortona…

WHAT’S IN THE BOX?

Salerno - The landing of the 5th Army.

Ortona - The shortest scenario of all; the 8th Army crosses the Sangro river and engages a fight at Ortona, defended by the Green Devils of the German 1st parachute division.

Anzio e Cassino - The Shingle Operation and the bloody battles of Cassino.

Diadem - The breakthrough of the Gustav line and the German entry into Rome.

The Kesselring’s Option: Foggia Counterattack - A hypothetical scenario, yet absolutely plausible: The 2nd SS Panzerkorps counterattacks in an attempt to reconquer Foggia and its precious airports.

The Campaign Game - The whole campaign, from the landing in Salerno to the conquest of Rome. The longest game!