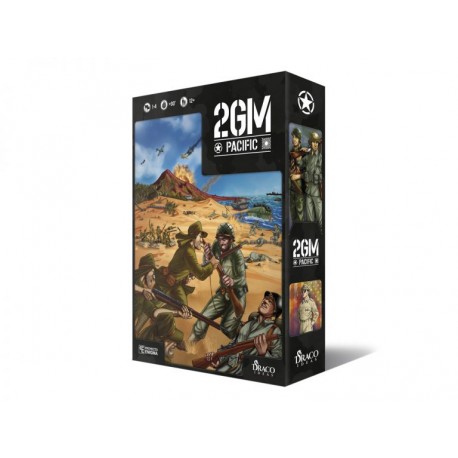 2GM Pacific is a tabletop wargame that allows you to recreate epic battles between the United States and the Empire of Japan’s armies in the Pacific Ocean Theatre of World War II.

The game allows for 1 to 4 players and has a strong army-building component, where cards represent military units and the various actions they can perform on the battlefield. Battles take place in turns until one of the players fulfills their victory conditions.

Deploy units on a big game board and improve them during the battle with extra upgrade tokens. Generals will have to optimize the resources provided by their nations and take advantage of the terrain to defeat their enemies.

2GM PACIFIC is a new standalone installment of the 2GM Tactics series, set in the Pacific Ocean Theatre with exciting encounters between American and Japanese forces. It is fully compatible with all other titles of the series 2GM Tactics, but you don’t need them to play.

The game includes a highly immersive Campaign Book with Historical Scenarios to recreate the Pacific War from beginning to end.

The Art has been completely redone maintaining the “American comic” style of the original 2GM Tactics series.